Tom is back where he truly belongs, in his kitchen. During the last two years Tom has been painting houses, fixing roofs and manning our Assador Grill in our Summer Tent but now that life is back to normal (almost)Tom is back in his lair and has cooked up a gorgeous new Autumn Menu.

Tom Doyle is his own man.  He has strong opinions and rarely wavers.  His talent is his backbone.

Originally from Bray in County Wicklow Tom believes he inherited his work ethic from both his parents Breda and Willie, however he attributes his culinary talents to his mother.   Despite the pressures of family life and work, his mother always made a home cooked dinner and Tom remembers being brought up on Ham Hock and lambs hearts, apple tarts and homemade quiches.

Tom grew up with his brother Conor but they also shared their home with many foster children.  He remembers always having a massive appreciation for what they had.

He was however, as he puts it himself an absolute disaster at secondary school, a self confessed terror, ‘a subject needed to interest me to catch my focus, I was always messing and acting the eejit.’ At one school this led to Tom being ‘politely’ asked to leave.

However, when he discovered the world of cooking it took over his life.  He put friends and family aside for years.  He was drawn to the intensity of the top kitchens.  After concluding his professional cookery course in IT Tallaght he headed to France where he spent 7 years working in 1 and 2 Michelin star fine dining restaurants.  He returned home to become the head chef at Caviston Fish Restaurant in Glasthule.  But Tom had a hard time settling, ‘I wanted to keep pushing, I need to have a challenge to work towards.’

This led him to work with Richard Corrigan at the Bentley.  He believes Corrigan to be a very clever chef, with a really good palette and a flair for defining flavours and says it was hard not to be infected by his enthusiasm.

Tom then moved on to the Mulberry Garden in Donnybrook where they strove for a Michelin Star.  However, he then moved on to work with Derry and Sallyanne Clarke at L’écrivain.  Tom describes his sojourn at l’écrivain as his most enjoyable.  ‘They gave me a free hand, they were fantastic people to work for and who better to learn from’. At L’écrivain the menu changed every week which was a wonderful challenge for Tom, ‘we were listing suppliers and provenance before it became the norm and I enjoyed the intensity of the chef’s blog’.

So what brought Tom and his partner Corina to County Mayo? ‘Alan Maloney is the reason(co-proprietor of Mount Falcon).  I met him and his vision and dream for Mount Falcon made the decision for me. Like Corrigan it was hard not to be infected’.   ‘The quality of life here is a bit of a no brainer as well and the fresh air’.

Tom and Corina have two dogs , two Caucasian Sheperds who actually have their own instagram account with almost 7,000 followers(@rolfthecaucasian)so space was essential and now Corina claims she wouldn’t sell their Mayo home if she were offered a million for it.

Lockdown had a massive impact on Tom. ‘It was the first time in my life that I had a normal existence, enjoying what we have in Mayo, which was pretty incredible.  I hope people don’t forget what we’ve been through’.

Of course the covid-19 pandemic has changed our lives forever and has had a huge impact on the hospitality sector.  Mount Falcon decided to re-invent themselves post lockdown and invested substantially in building an open-air tent on their lawn with a specially commissioned alfresco BBQ kitchen.  How does Tom feel about this, going from fine dining to BBQ? ‘We’re getting back to basics. It is a challenge, it’s something different but you have to be able to adapt as a chef, be it in a recession or a pandemic’. ‘You have to look at your product from a customer point of view and this summer it is massively family oriented, pure enjoyment after lockdown’.

‘I am quite easy going, I try to be fair and nobody gets treated differently. I refuse to sugar coat anything.  I do not beat around the bush, there is no illusion as to what I’m thinking or believing at any particular time. I believe we follow trends too much as opposed to being yourself.  Just be humble and do what you do with conviction’.

Which is what Tom is currently doing at Mount Falcon. 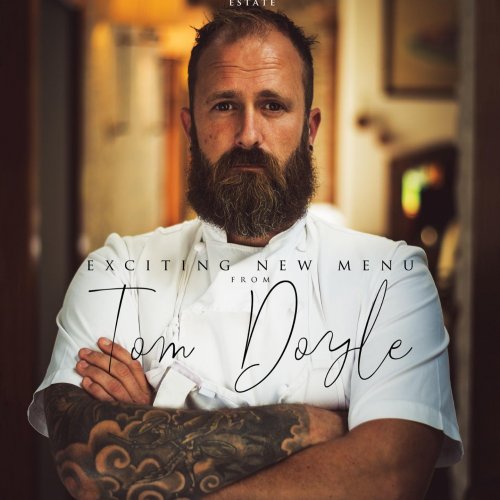