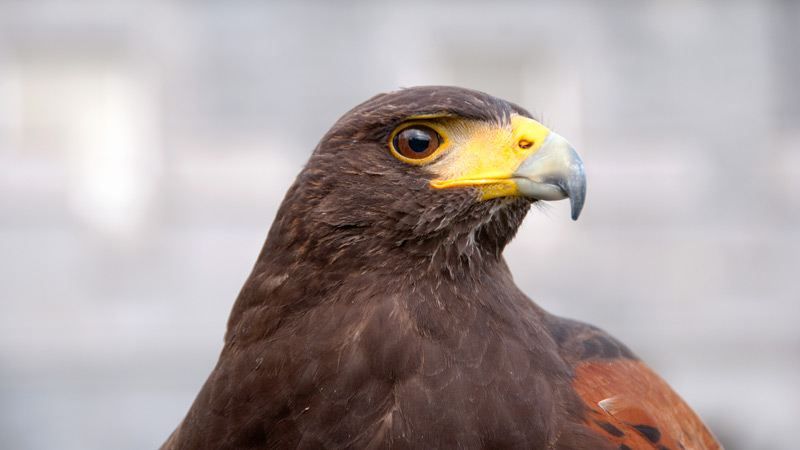 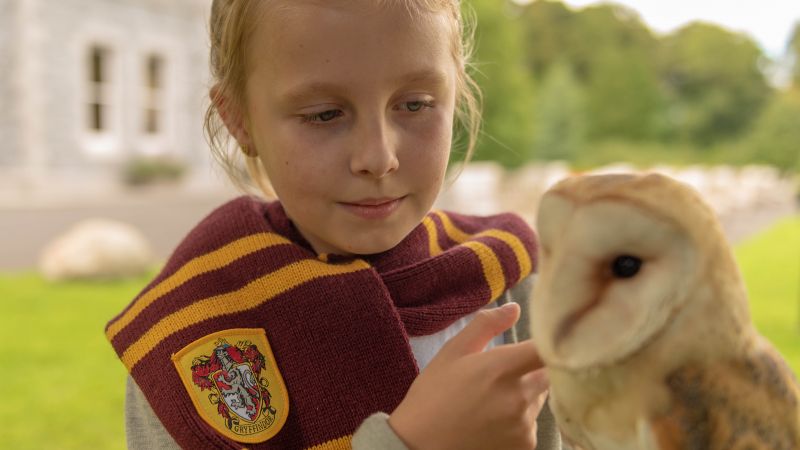 The ancient tradition of Falconry, which has been handed down through the generations for over 4000 years, is the art of hunting with birds of prey. At Mount Falcon Estate, Ballina. Co. Mayo, you can enter into this world with our resident Falconers who will personally introduce you to the various birds of prey on display. Experience a Hawk Walk and share in the secrets of the birds hunting habits and their place in the ecosystem. A lesson in this ancient husbandry will be completed with a walk through our magical woodlands Estate which is situated in Ballina in Co. Mayo. You get to experience the magnificence of a Harris hawk in its natural environment. In addition to our Hawk Walks, we offer displays for large gatherings such as corporate events, weddings and family occasions. For hunters, we offer a truly unique full day experience with our birds of prey, hunting dogs and Falconers.
See below the descriptions on each of the birds of prey housed here on Mount Falcon Estate, Ballina, Co. Mayo.

Barn Owl
The barn owl is the most distributed species of owl . They are red listed in Ireland due to the decline in breeding. The population around Europe is slowly declining. The barn owl is rarely seen during the day and is only active at night. It is most likely to be seen flying across roads in car head lights. They appear a ghostly white with no marking on the underwing. They are a long eared owl and have a dark comma mark. They hunt small mammals and frogs. They are very difficult to observe and there are no regular sites to see barn owls.

Harris hawks are large lanky raptors with long legs and long tails. They fly on broad rounded wings. The females weigh almost twice as much as the males. Harris hawks are dark brown with reddish brown feathers on the wings and thighs. The tail is mostly dark with a white rump and white terminal band. Harris Hawks perch themselves on telephone poles, cactus, posts, or other features that offer a view of the surroundings. The harris hawks hunt and travel in groups and sometimes walk or run along the ground when hunting. They soar on rounded wings, and frequently fan their tails. They are frequent to urban and suburban areas due to the easy access to water and food (pigeons)

The Peregrine Falcon is a raptor, or bird of prey. Adults have blue-grey wings, dark brown backs, a buff coloured underside with brown spots and white faces with a black stripe on their cheeks. They have hooked beaks and strong talons. The Peregrine Falcons name comes from the Latin word peregrinus which means ‘to wander’. They are the fasting flying birds in the world and are able to dive at up to 200 miles per hour. The Peregrine Falcon will eat other birds such as songbirds and ducks, as well as bats. They catch their prey mid-air. Peregrine Falcons mate for life and breed in the same territory each year. The male courts the female for about one month by using aerial displays. They make a nest on ledges and in caves located high of cliffs. Some Peregrine falcons will use man made structures such as bridges and skyscrapers to nest.

The snowy owl is a native to arctic regions in north America and Eurasia. They are a very large owl, about the same size of a raven. They are very distinctive as they as almost all white in all plumages. Adult males are pure white and adult females are white with an extensive black barring on the wings and body. The snowy owl hunt various small to medium sized mammals (mainly rabbits) and birds. They are known to be very aggressive when defending their nest and will attack those who try to disturb it. Their a rare winter visitor, mainly to western counties such as Mayo. Most often seen roosting during the day on bogs.

Great grays are one of the tallest owls, they also have broad wings and a long tail. They are big headed owls with a large facial disk. They dwarf most other owls in size but not inweight due to their feathers. Their bulk is mostly made up of feathers. The females are larger then males. Great gray owls are a silvery gray patterned with fine white, gray and brown streaking and faint barring. Their yellow eyes shine through the fine gray-and-brown concentric circles of the facial disk. They generally try to not draw too much attention to themselves and tend to avoid areas with people. They quietly perch on the edges of meadows or forest openings and are nearly invisible despite their size.

Eurasion Eagle-owls are among the worlds largest owls. They combine fast and powerful flights with shallow wing beats and long fast glides. They soar updrafts, displaying a type of flight similar to a soaring hawk. They have orange eyes and feathery ear turfs which make them one of the most striking owls in the world. Their large, powerful feet and strong flight make them powerful hunters. They mainly eat small mammals such as voles, rats and rabbits but also hunt woodpeckers, herons and other birds. They also prey on reptiles fish and insects. They live in woodland habitats and are mostly found in rocky outcrops and cliffs. However, they also live in open habitats that have trees and rocky areas like farmlands and grasslands.

The word ‘’ferret’’ is from the Latin fur, meaning ‘’little thief.’’ One of the ferrets favourite acctivites is stealing and hiding things. Similar to all members of the weasel family , ferrets are closly related to skunks and can emit an odorous smell when excited or afraid. When a ferret gets excited they preform what is called a ‘’weasel war dance’’ which is a series of leaps, sideways hops, and bumping into nearby objects. Ferrets come in a variety of colours, including choclate, cream, cinnamon, silver and albino. All ferrets are born white and begin to turn their adult colour after 3 months. Adult male ferrets are called hobs, and adult females are called jills. Ferrets have very flexible ribs that allow them to crawl through very small spaces. They sleep for about 15-20 hours a day, usually about 4 hours at a time. A ferrets sleep is also known as ‘’ferret dead sleep’’ because ferrets sleep so deeply.

Baby ferrets are called kits. Ferrets imprint on their food at 6 months old, which makes introducing new food to older ferrets difficult. Baby ferrets are born both deaf and blind and begin to hear and see at around 34 days old.

The Irish Water Spaniel is an intelligent and spirited breed of dog. They are a quick learner and love learning new things which make them very easy to train. Their coat is covered in long loose curls on the body and shorter hair on the face and tail. The curly coat has a dense undercoat that insulates the dog from cold water. There is a topknot of curls on top of their head and they also have webbed feet that are round spreading and covered in hair. They are a hunting and breeding dog therefore they require a lot of exercise for proper physical and mental development. 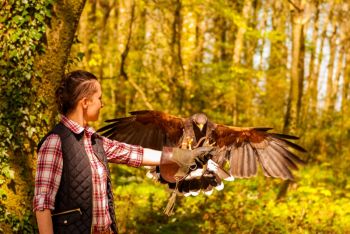 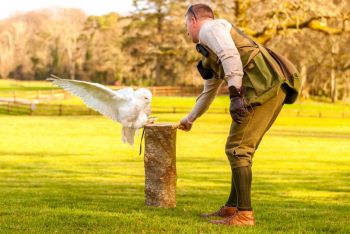 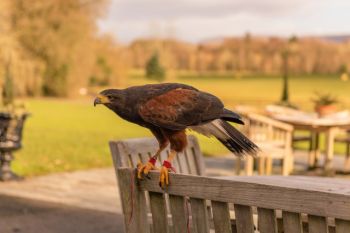 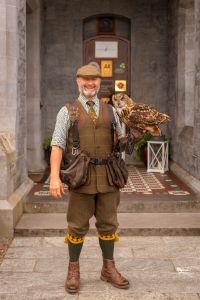 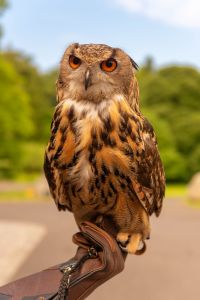 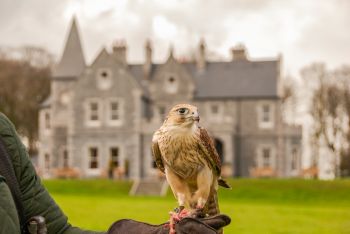