Hi folks, my name is Martin and I’m the resident falconer at Mount Falcon Estate.
We currently have 8 Raptors residing at our falconry. All the Raptors possess Super Senses which are utilised throughout their lives in their natural environment and within the falconry.

I will explain some the Super Senses that each of the Raptors possess at the end of each specific to the Hawk, Falcon or Owl we are writing about.

This currently consists of Two Peregrine Falcons, Two Harris Hawks & Four Owls.
All our Raptors have a role to play within the Falconry, either on a daily or seasonal basis.
The Peregrine Falcons carry out flying displays during the summer season, whilst the Owls generally work during displays at weddings, educational sessions and on other occasions.

On today’s Blog you’ll find attached a photograph, taken this morning in the weathering Yard, of Rogue, our ten Year Old Male Peregrine.

Here is a short description of the Peregrine Falcon.

The peregrine falcon (Falco peregrinus), also known as the peregrine, is a widespread bird of prey in the family Falconidae.

As is typical of bird-eating raptors, peregrine falcons are sexually dimorphic, with females being considerably larger than males.

The peregrine is renowned for its speed, reaching over 320 km/h (200 mph) during its characteristic hunting stoop (high speed dive) making it the fastest member of the animal kingdom.

While its diet consists almost exclusively of medium-sized birds, the peregrine will occasionally hunt small mammals, small reptiles, or even insects. Reaching sexual maturity at one year, it mates for life and nests in a scrape, normally on cliff edges or, in recent times, on tall human-made structures.

The peregrine falcon is a well respected falconry bird due to its strong hunting ability, high trainability, versatility, and in recent years availability via captive breeding. It is effective on most game bird species from small to large. 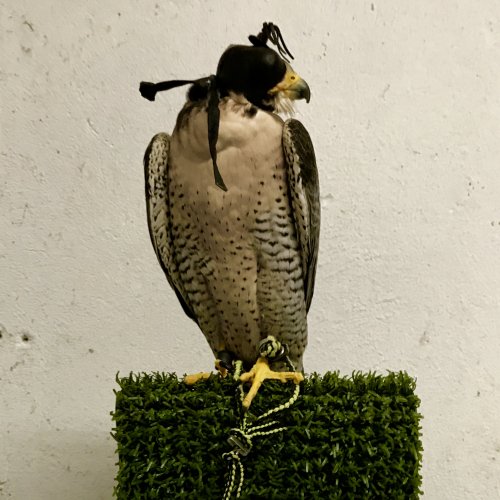