An injured wild peregrine falcon, whose life was saved by a farmer, is recovering in a Mayo aviary.

The young female, which narrowly avoided being destroyed due to fears of avian flu, may be released back into the wild again when its injury heals.

The peregrine falcon is a protected species which was almost wiped out in Ireland by pesticides in the 1950s and 1960s.

The population has recovered slowly, and there are an estimated 420 pairs in the Republic.

Farmer Micheál Clarke of Gortatogher, near Ballina, first spotted the injured bird in a local field some weeks ago, and managed to rescue it the following day.

“It was a very large bird, and at first I thought it was a buzzard as they are very common around Errew Abbey in north Mayo,” he said.

“I went back to look for it the following day, and there it was. I knew it was at risk of being killed by foxes. The peregrine falcons are beautiful birds, and they don’t kill lambs — they only eat other birds.”

Mr Clarke had no gloves to protect his hands — so he threw his coat over it, and brought the bird in a chicken cage to Ruth Bourke at Castlehill, who owned the field. She suggested it might have escaped from the aviary at the Mount Falcon Hotel in Ballina and contacted the hotel.

​On receiving the call, Eibhlín Ní Chonghaile, wife of Mount Falcon Hotel’s owner, collected the bird and was initially advised it should be left to die, due to the risk of avian flu.

However, she contacted Micheál Casey, head of the Department of Agriculture’s regional veterinary laboratories, who said it could be tested for the disease once it was quarantined in the interim.

“We all know about risks of avian flu, but there is an antigen test for it,” Ms Ní Chonghaile said.

“I kept the bird in the back bathroom of the house, took a stool sample for the avian flu tests, and fed it chicks and mice for several weeks while we awaited the results.

"It was quite tame, as it let me come in and leave food for it. I had to clean down the bathroom every three days, to ensure the bird wasn’t inhaling its own faeces.

"We had to fix a cat-proof double rope to secure the bathroom door, as the cat managed to open the door one time and almost let it out.”​

Details from two rings on the bird’s talons were relayed to the National Parks and Wildlife Service (NPWS). NPWS ranger Irene O’Brien, who is district conservation officer with the Wild Atlantic Nature programme, confirmed it was a young female she had ringed as a chick in early June of this year.

“The bird was one of four chicks born in a quarry in south Mayo and it’s exceptional to get a brood of that size,” Ms O’Brien said.

The avian flu test was negative and the bird was taken to the Animal Hospital in Castlebar, Co Mayo, where an x-ray showed it hadn’t broken its wing, and that the injury may be soft tissue which can heal. ​

“Birds which break their wings usually die, as they can’t fly — but this bird could recover, and would then be released back into the wild,” O’Brien confirmed.

The bird is still not flying and is being cared for by falconer Daniel Gibbons in the Mount Falcon aviary — where, as Ní Chonghaile notes, it has attracted the interest of at least one amorous male.​ 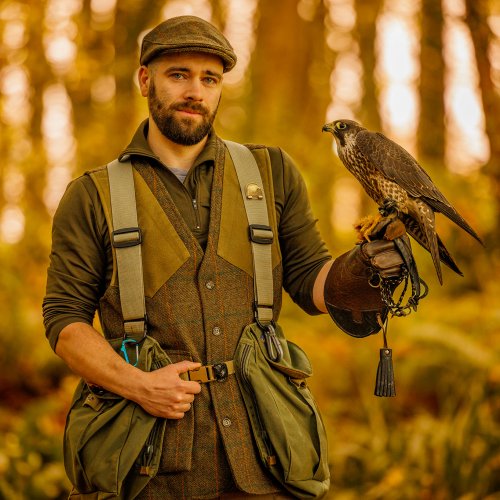