The last few weeks have seen an improvement in the numbers of spring fish running the rivers and lakes that form part of Mount Falcon’s 3 Rivers package. Both Beltra and Carramore Lakes now have a good head of fish and are regularly producing sport when conditions are right. One successful angler was former Mount Falcon Ghillie Mike Wilson (pictured) who on the 15th April had a fresh 10.25lb fish on Beltra Lake.  The spate river’s have also seen the arrival spring salmon. May normally sees the peak of the spring fishing on both the Owenduff and the Owenmore. Weather conditions over the last week have seen a slow down in the numbers of fish being caught (and anglers fishing), but with the weather due to pick up we would expect to see both fishing effort and catches rise.

In terms of the Moy, the upper river has been producing fish to both bait and fly. The lower beats including Mount Falcon generally start to fish later than the upper river, but we are pleased to report that the Wall Pool produced it’s first fish to the worm last Saturday (25th April). One to tie and try. The Jonu Lomu. Thanks to Eammon Kennedy from Beltra for introducing us to this pattern. It works well on the dropper of a 2 fly cast for lake salmon (Mike Wilson took his Beltra fish on this fly). Hook Size 6-10. Tail red wool with a few strands of crystal flash. Body – Black Floss. Hackle – palmered black cock with a silver rib. Cheeks – jungle cock.Overwing – a few strands of crystal flash. 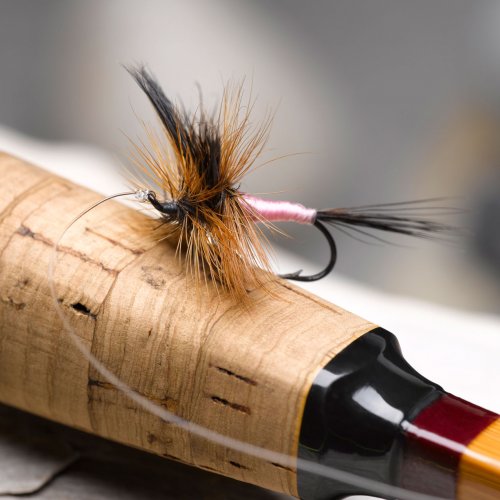