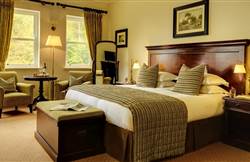 “There are few hours in life more agreeable
than the hour dedicated to the ceremony
known as afternoon tea.”
Henry James, The Portrait of a Lady
Afternoon Tea, a brief History:
Tea consumption increased dramatically during the early nineteenth century and it is around this time that Anna, the 7th Duchess of Bedford is said to have complained of "having that sinking feeling" during the late afternoon. At the time it was usual for people to take only two main meals a day, breakfast, and dinner at around 8 o'clock in the evening. The solution for the Duchess was a pot a tea and a light snack, taken privately in her boudoir during the afternoon.
Later friends were invited to join her in her rooms at Woburn Abbey and this summer practice proved so popular that the Duchess continued it when she returned to London, sending cards to her friends asking them to join her for "tea and a walk in the fields." Other social hostesses quickly picked up on the idea and the practice became respectable enough to move it into the drawing room. Before long all of fashionable society was sipping tea and nibbling sandwiches in the middle of the afternoon.
Today at Mount Falcon we offer Afternoon Tea in our Lounges proudly prepared by team, using the freshest ingredients, including produce grown in our Kitchen Garden. Served daily during the following times :
Afternoon Tea:
Afternoon Tea 1.00pm - 4.00pm - Booking Essential